Tick vs Tic – Confused between Tick or Tic?

Tick vs Tic – Confused between Tick or Tic? 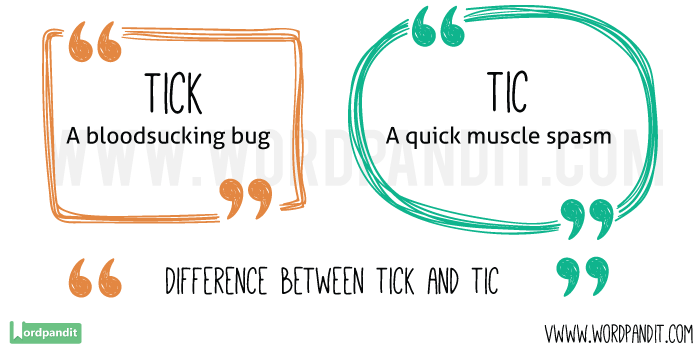 Word 1: Tic (TIK)
Meaning 1: A local and repetitive motion of a certain muscle, usually called a spasm.
Example Sentence: I used to get a tick in my left eye during my younger years, but it slowed down in my teenage years.

Word 2: Tick (TIK)
Meaning 1: A click or a tap, usually short but sharp.
Example Sentence: I heard the tick of the wooden stick as my grandfather walked from the living room to the drawing room.

Meaning 3: A mark to show something has been noted, done or corrected.
Example Sentence: I ticked all the items on my list as I bought them.

Meaning 4: An agreement to pay for something after a period of time.
Example Sentence: The shopkeeper agreed to send the grocery items on tick.

Meaning 5: An indication about the time it takes a clock to make one click, a second.
Example Sentence: The husband promised his wife he would be home in the tick of a second.

Example Sentence using both words:
Ryan felt a sudden tic on his right arm and saw that there was a tick sitting right there. In a tick, he threw it off and applied an antiseptic.