Throw vs Throe – Confused between Throw or Throe?

Throw vs Throe – Confused between Throw or Throe? 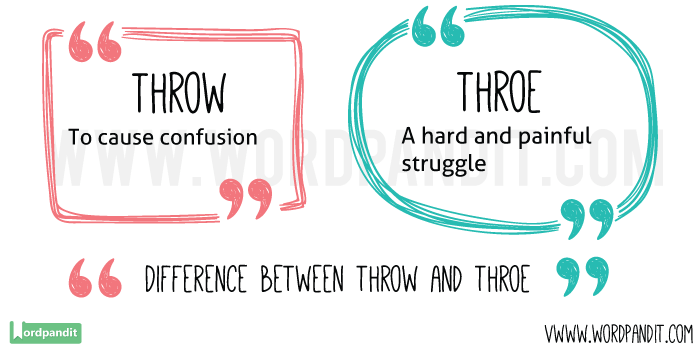 Word 1: Throe (THROH)
Meaning 1: A hard and painful struggle.
Example Sentence: Justin was in the throes of sorrow due to the loss of his father.

Meaning 2: An experience of spasm or pain.
Example Sentence: The small country was in the throes of economic collapse.

Word 2: Throw (THROH)
Meaning 1: To cause confusion.
Example Sentence: She was thrown off balance by the velocity of the questions hurled at her.

Meaning 2: To cause or to create.
Example Sentence: The sun throws the shortest shadows during the afternoon.

Meaning 3: To put suddenly or forcefully into a given condition, position, or activity
Example Sentence: She threw her leg over the arm of the chair.

Example Sentence using both words:
During the debate, Sally was thrown off by the apparent change in topic and consequently was in a throe of sorrow afterwards.