This vs That – Confused between This or That?

This vs That – Confused between This or That? 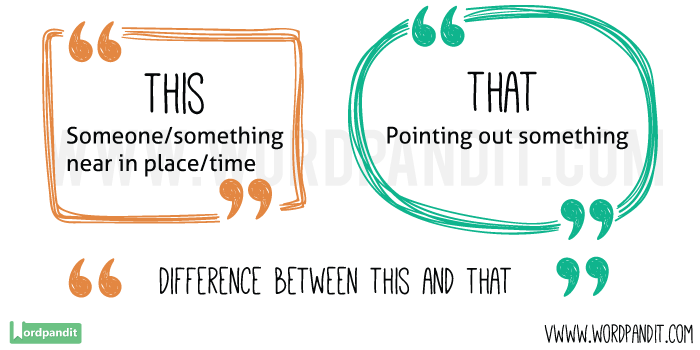 Word 1: That (THAT)
Meaning 1: Used to introduce an exclamatory clause.
Example Sentence: Kelly said that she met the president of the student run organization at a party.

Meaning 2: Used to identify a person, an event etc. as mentioned before.
Example Sentence: We were introduced at a party and after that we met quite often.

Word 2: This (THIS)
Meaning 1: Something that is close at hand and under immediate observation.
Example Sentence: The boss said,” We will continue this discussion tomorrow morning.”

Meaning 2: Someone or something near in place or time.
Example Sentence: Sam said to me,” This is the instructor I wanted you to meet.”

Meaning 3: Something that has been indicated in a subsequent expression.
Example Sentence: The teacher said,” This is what I want to tell you about fruits; they are the best source of vitamins and minerals.”

Example Sentence using both words:
The teacher said to the student before the test,” This is something that I really want you to understand.”