Than vs Then – Confused between Than or Then?

Than vs Then – Confused between Than or Then?

Word 1: Then (THEN)
Meaning 1: Belonging to a specific time.
Example Sentence: I received a medal from the then Prime Minister, Dr. Manmohan Singh. 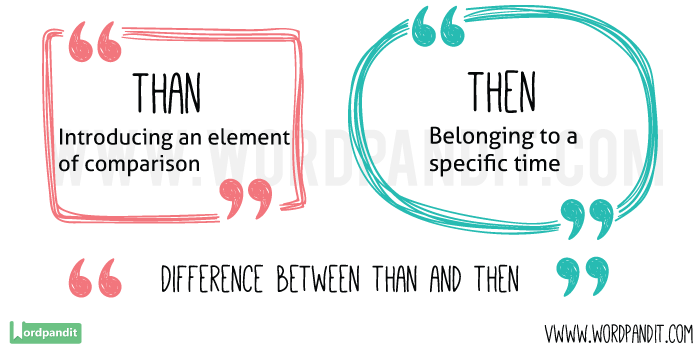 Meaning 2: Something following next in sequence to indicate what happened next.
Example Sentence: Ross won the first, then the second game.

Meaning 3: A function word used to make a final statement that refers back to things that have just been mentioned.
Example Sentence: Sam said to Kelly,” Both of us, then, must take the responsibility of the child”.

Word 2: Than (THAN)
Meaning 1: A function word used for indicating contrast, exception or diversity.
Example Sentence: Jaby claims not to have anything other than his home.

Meaning 3: Used in expressions indicating one thing happening immediately after another.
Example Sentence: No sooner was I seated than Sheela sidled closer to me.

Example Sentence using both words:
Ron said to Emily,” I would rather meet him then, than meet him now.”