Tenor vs Tenure – Confused between Tenor or Tenure?

Tenor vs Tenure – Confused between Tenor or Tenure? 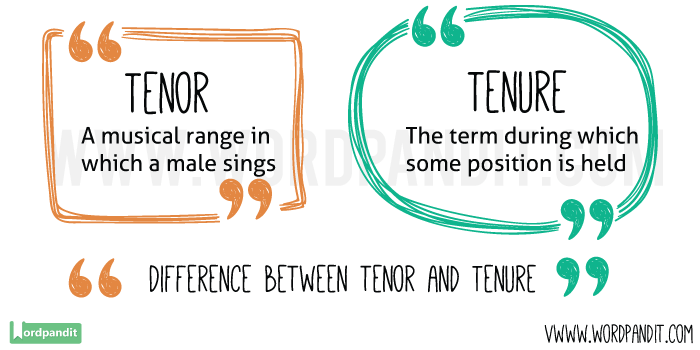 Word 1: Tenure (TEN yuhr, TEN yoor)
Meaning 1: The time period during which a position is held, or status granted to an individual in a professional position.
Example Sentence:The government of India has tenure of five years for ruling.

Word 2: Tenor (TEN uhr)
Meaning 1: A musical term describing the highest of the ordinary adult male range, or the person who sings in this range.
Example Sentence: Sam is a very talented musician with an outstanding tenor voice.

Meaning 2: The general meaning, content or idea of something.
Example Sentence: A good book is not about the language or facts; it’s about the whole tenor of the book.

Meaning 3: An instrument with a high musical range.
Example Sentence: Kelly decided to play the tenor saxophone for the evening concert.