Taser vs Teaser – Confused between Taser or Teaser?

Taser vs Teaser – Confused between Taser or Teaser? 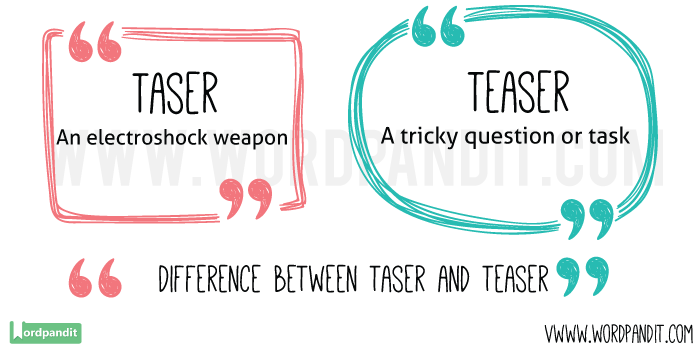 Word 1: Teaser (TEE zuhr)
Meaning 1: An advertisement that attracts customers by offering something extra, at a discount or free.
Example Sentence: We saw the teaser for 50% discount at Fantaloons as a part of the pre-GST sale.

Meaning 2: An attention getting episode or description presented before the start of a television show or at the end of a movie.
Example Sentence: The new Salman Khan movie’s teaser was the most acclaimed teaser of recent times.

Meaning 3: Someone who harasses another person maliciously, usually by persistently annoying.
Example Sentence: My brother is a teaser of my taste in classical music.

Word 2: Taser (TAY zuhr)
Meaning 1: A trademark name used for a high-voltage stun gun.
Example Sentence: A stun gun used by anyone is usually referred to as a taser.

Meaning 2: An electroshock weapon that uses current to disrupt the control of muscles.
Example Sentence: The police used a taser to knock down the culprit.

Example Sentence using both words:
The new movie teaser involved a fighting scene where the protagonist uses a taser to attack the antagonist.