Taper vs Tapir – Confused between Taper or Tapir?

Taper vs Tapir – Confused between Taper or Tapir? 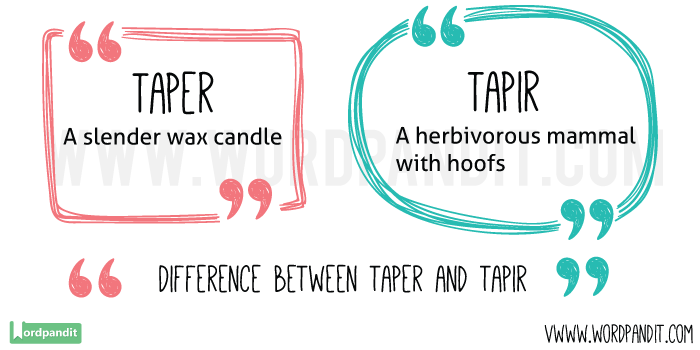 Word 1: Tapir (TAY-puhr, tuh-PIR)
Meaning 1: Any of various odd-toed ungulates of the genus TAPIRUS of tropical America, the Malay Peninsula and Sumatra, having a heavy body and short legs.
Example Sentence: The Baird’s Tapir are native to Central America.

Meaning 2: A graduated narrowing of something towards an end.
Example Sentence: My father asked the tattoo artist to taper his tattoo down his bicep.

Meaning 3: To diminish in size.
Example Sentence: The more I wrote in my workbook, the more my pencil began to taper.

Example Sentence using both words:
During my visit to Central America last year, I used a taper to see the tapir outside my tent at midnight.