Tail vs Tale – Confused between Tail or Tale?

Tail vs Tale – Confused between Tail or Tale? 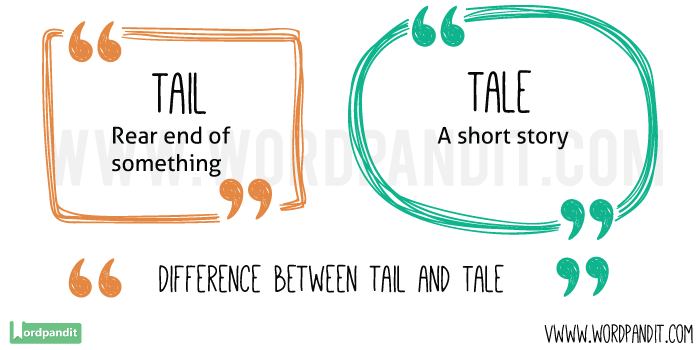 Word 1: Tale (TAYL)
Meaning 1: A story either based on fact or fiction.
Example Sentence: Panchatantra is India’s ancient Sanskrit collection of tales, containing moral lessons for the kids.

Meaning 3: Gossip or stories that can be derogatory.
Example Sentence: We should always refrain ourselves from telling tales about other people which we know nothing about.

Word 2: Tail (TAYL)
Meaning 1: The lower or rear end of something.
Example Sentence: While coming out of the car, my dog’s tail got caught in a closing door.

Meaning 2: To follow a suspect, to keep an eye on a person.
Example Sentence: The police had to tail the suspect for two hours, before they finally caught him.

Meaning 3: To become fainter.
Example Sentence: My interest in playing the piano tailed off over the years.

Example Sentence using both words:
My sister wrote a tale about a cat’s tail, for which she won the second prize in her school.