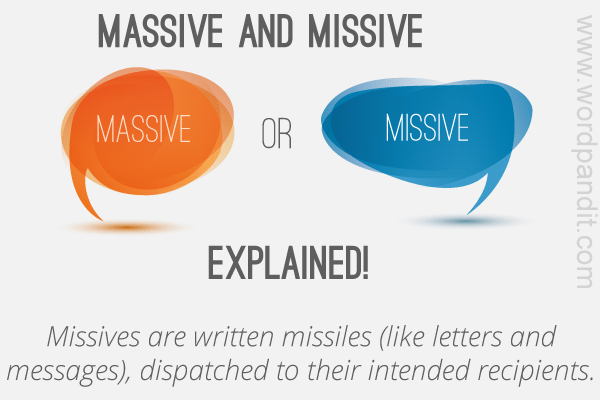 Massive and missive are two words that can be easily distinguished. The word massive is something that is etched in our memories simply through its massive amount of use. The only consideration that we need to recall is the meaning of the word missive. Missive refers to ‘a written message addressed to a person or organization’.

Just Remember: Missives are written missiles (like letters and messages), dispatched to their intended recipients.

Examples of incorrect uses of Massive and Missive:

1. She enjoys missive amount of publicity.
2. He had been preceded by an airmail massive from his uncle.

Examples of correct uses of Massive and Missive:

1. There was a massive explosion.
2. The missive renewed speculation about the health of the Supreme leader.

Massive has the following meanings:-
1. Large when compared to what is typical: “The ship was hit by a massive glacier and sank in the ocean waters .”
2. Solid, ponderous, heavy: “In Egypt, massive stone blocks were used to build pyramids.”
Missive, on the other hand, means a written letter or communication: “In the age of mobile phones, the practice of writing missive has faded away.”