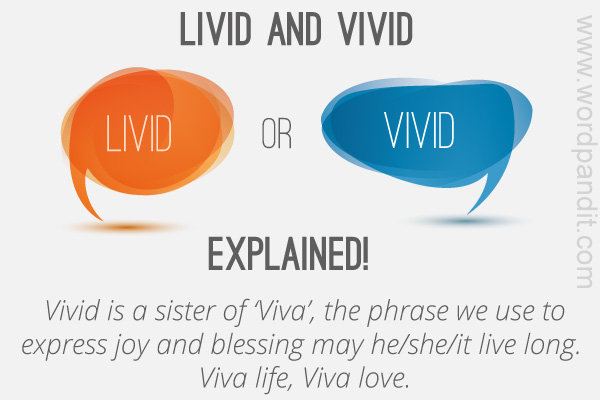 The vivid colors of his face concealed his livid emotions.
The livid colors his face did not reveal his vivid personality.
The sentences above are correct. They are absolutely correct, though each has a different implication.
Livid originated from the Latin word līvidus, meaning ‘to be bluish’. Used to refer to the color of the skin, livid refers to a discolored or ashen appearance the takes. It is also used to refer to the state of extreme anger; usually in this case, the color of one’s face undergoes a change.

Just Remember: Vivid is a sister of ‘Viva’, the phrase we use to express joy and blessing may he/she/it live long. Viva life, Viva love.

Examples of incorrect uses of Livid and Vivid:

1. The county officials were vivid about that, so they want to get someone who can actually finish the job.
2. Allow these feelings to become more livid and clear.

Examples of correct uses of Livid and Vivid:

1. The employees were livid about his new law, and felt they were being placed under unnecessary controls.
2. His painting was successful portraying the vivid colors of the landscape.

Livid means considerably angry: “The face of the father was livid with anger and consternation when he found that his own son had stolen the cash and jewellery from his house.”
Vivid on the other hand, has the following meanings:-
1. Highly colored: ” Our faces were vivid and shining when we sat near fire on the Lohri Festival.”
2. Creating a strong impression, usually positive; “Her vivid personality impressed her new employers.” The memories of my first visit to Shimla by the toy train are still quite vivid.”