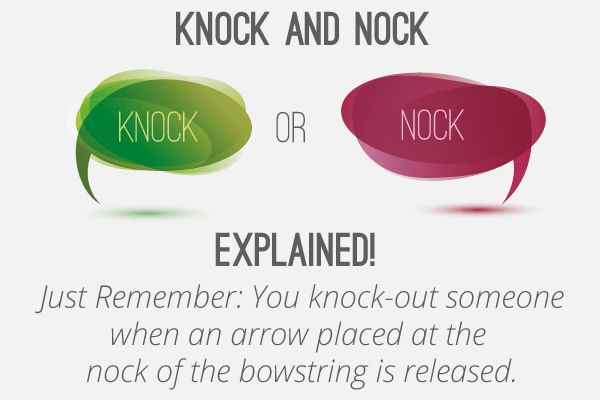 Well, nock is actually a common misspelling for knock (the silent k does a lot of people in). But the curious fact is that nock is a word in itself, and in general is used to refer to the notch at the end of the arrow into which the bowstring fits.

Just Remember: You knock-out someone when an arrow placed at the nock of the bowstring is released.

Examples of incorrect uses of Knock and Nock:

1. Strong winds can nock out cell towers.
2. They advised to use only two knock locators.

Examples of correct uses of Knock and Nock:

1. He knocked at the door.
2. They said that only plastic shrink nock locators would be permitted.

Knock has the following meanings:-
1. To strike loudly and sharply or to draw attention to a situation or circumstance: “Who is knocking at the door?”
2. To make or to create a pounding noise: “The engine of the car needs repairs as it knocks even in the fourth gear .”
3. To criticize or to find fault: “It is not healthy to knock others over trivial matters .”
Nock, on the other hand, means the groove at either end of a bow for holding the bowstring: “Since the nock of the arrow was not properly cut , it kept slipping out of the bowstring.”