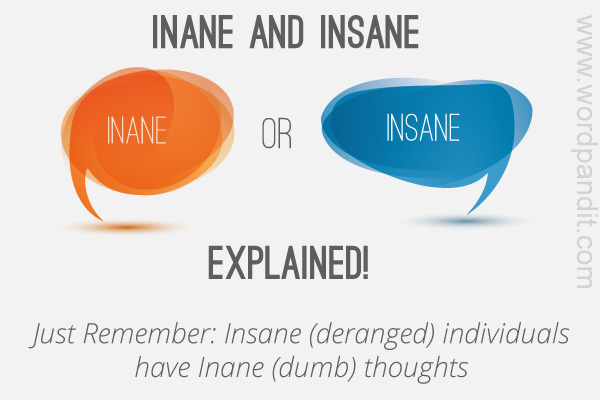 This is one of the prettiest looking usage differences: the difference of a single S in two words that actually have a decent sound.

Inane, implying stupidity, is a characteristic of insane (meaning mad) individuals. There is a simple way to learn these two words. Place them in context of your real life. You would know these two types of individuals, an inane person and an insane one. Just recall these two people, and voila, you remember the word.

Examples of incorrect uses of Inane and Insane:

1. Most of the management theory is insane.
2. It is true what they say about inane asylums.

1. All he brought to the party were his inane drinking comments.
2. He was completely insane as he thought that all his students might give up their cell phones.

Inane is very silly or stupid: “He was ridiculed by his friends for his inane and inept remarks.”
Insane means having or showing severe mental illness; mentally ill or deranged: “The accused was given a benefit of doubt because he had been declared insane by the doctors.”