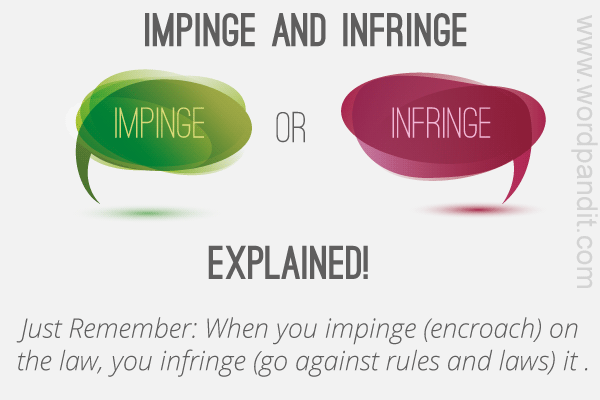 Infringe, originating from the Latin word infringere meaning to break something, is a word that is often used in the legal sense. When someone breaks the law, we say he has carried out an infringement. Infringement is a team that is also used in sports and is used to signify the breaking of rules.

Impinge, on the other hand, is derived from the Latin word impingere meaning to strike against. Impinge stands for collision and things striking on something. When something hurts our senses, we say it impinges on our senses.

Just Remember: When you impinge (encroach) on the law, you infringe (go against rules and laws) it .

Examples of incorrect uses of Impinge and Infringe:

1. Human activities simply infringe in too many times and hurt the senses.
2. He didn’t impinge on anyone rights.

Examples of correct uses of Impinge and Infringe:

1. There are many things that impinge on my privacy and I do not appreciate the same.
2. It is never a good idea to allow the government to infringe your rights.

Impinge is to hit or to strike something: “Loud music blurted out through amplifiers impinge on our peace and rest.”
Infringe , on the other hand, is to enter into someplace in a manner that violates the law.”Walking into anybody’s premises without permission is infringing on one’s right to privacy.”