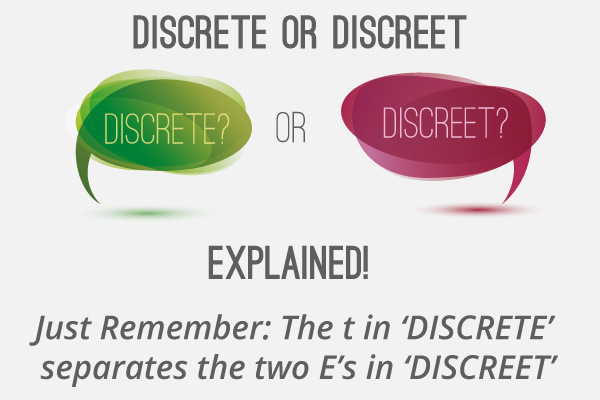 This is one difference that is explained almost all over the internet. We can that its presence is not all that discrete or should be say discreet?

One of these words refers to secrecy and prudence, the other refers to distinct and separate entities. Both these words are derived from the same Latin word discretus, which means “separated, distinct’. Somewhere in the 17th century, our great language created a distinction in the usage of these words. The spelling discreet began to used in the sense of being careful and prudent. The spelling discrete continued to be used in the sense of separate entities.

Just Remember: The t in ‘DISCRETE’ separates the two E’s in ‘DISCREET’

Additional mnemonic to remember the difference:

Lovers named E meet discreetly; but jealous T forces the E’s to be discrete.
(Source: Everything you know about English by Bill Brohaugh)

Examples of incorrect uses of discreet and discrete:

1. The British princess had a brief and discrete affair with the Saudi prince.
2. I was in search of discrete working space, where I could maintain my privacy and would not be disturbed by anyone.
3. I always broke down all my toys into their discreet parts.

Examples of correct uses of discreet and discrete:

1. When one in working in the public sphere, it is important to be discreet about one’s private matters.
2. It is difficult to identify the discrete effects of various events on the environment, especially when these events take place concurrently.

Discreet means displaying wise reserve in one’s speech or conduct; being prudent and careful: “School teachers should be discreet in their comments so that they do not hurt any student.”
Discrete means constituting a separate thing; distinct: “Democracy has three discrete divisions: legislature, executive and judiciary.”
There is a discrete difference in the two neighborhoods; so, we must be discreet when we are talking with the local residents.