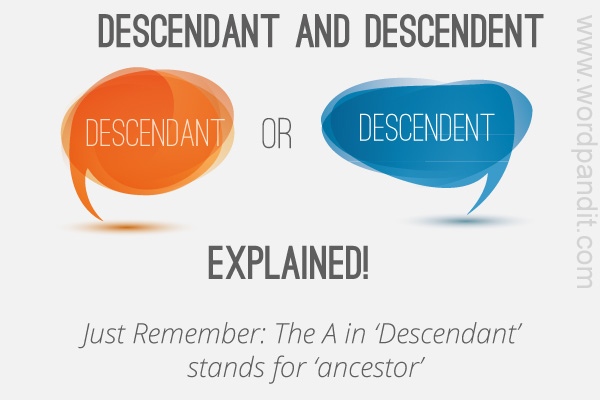 This is a traditional difference which is at times lost out in modern usage. Descendant, used as a noun, refers to someone who descends from someone else. Descendent, on the other hand, refers to the act of moving downward. Descendent is a word that is used in place of descendant now, though its usage is less common.

For examination purpose, we will treat the words the traditional way and keep the distinction in usage alive.

Just Remember: The A in ‘Descendant’ stands for ‘ancestor’.

Examples of incorrect uses of Descendant and Descendent :

1. He was a descendent of the wolves.
2. The descendant vehicle on the ramp crushed everything in its path.

Examples of correct uses of Descendant and Descendent :

Descendant means someone who is related to a person or group of people who lived in the past: “He was a descendant of partition immigrants.”

Descendent means moving downward; a downward incline or passage; a slope: “The mountain climbers were not aware of the steep descendent hill until it was too late.”

When her friend studied genealogy, she was particularly interested in onedescendant of her mother who had at one time been very wealthy; however, that relative became a descendent into poverty because of the bad investments that were made in the stock market.