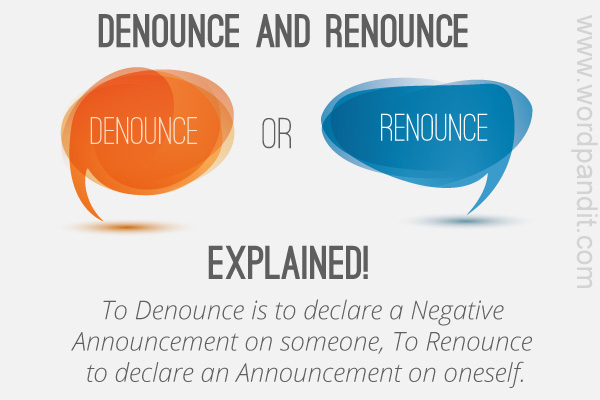 I denounce him to a life of poverty!
I renounce the world to live a life of austerity!
The two proclamations above illustrate the symbolic difference between these words. Once is concerned with the self, the other with things which are external.
Denounce originated from the Latin word denuntiare which means to command while Renounce originated from the French word renoncer which means to abandon a viewpoint. Denounce is externally directed while renounce is internally focused. The root element of these words is ‘nunt’ which means messenger. Two other words based on the same root: announce (to bring a message, according to its roots) and pronounce (to put forth an announcement).

Examples of incorrect uses of Denounce and Renounce:

1. She broke the silence to renounce the verdict.
2. He should denounce his affiliation.

Examples of correct uses of Denounce and Renounce:

1. His own former supporters denounce his ideology.
2. The government refused to renounce its claim.

Denounce is to speak or to make threatening remarks against or about an individual or situation: “The mob made angry comments seeking to denounce the government for the high taxes.”

Renounce is to give up or to refuse to follow or to cooperate: “The Buddha chose to renounce his throne and begin his quest for salvation”

They stood up to denounce the crowd that was calling for the king to renounce his throne.