5 CAT Percentage Questions you should solve

Introduction:
Percentage is one topic that appears underpins CAT Arithmetic essentially. It essentially is the first topic that you study in CAT Arithmetic and is the topic that finds near universal application in the whole area. In fact, right from our childhood, we have been calculating percentages in some form or the other and percentages form a ubiquitous part ofour everyday lives. By solving these five percentage questions, you learn the basic applications for this topic and how does this topic appear in different exams.

If the report is retyped –

New sheets have 65 lines, with 70 characters per line

Hence, 16 pages will be required if report is retyped.

Let x voters voted against the party in the Assembly Poll.

Next year votes against the PNC party increase by 25%

So, votes against the party in general election = 1.25 x

Therefore, majority of votes by which party lost in general election

It is given that, PNC Party lost by a majority twice as large as that by which it had won the Assembly Polls, Therefore

Therefore, votes polled by the voters for the party in Assembly Polls for previous year

Let x be the total number of voters 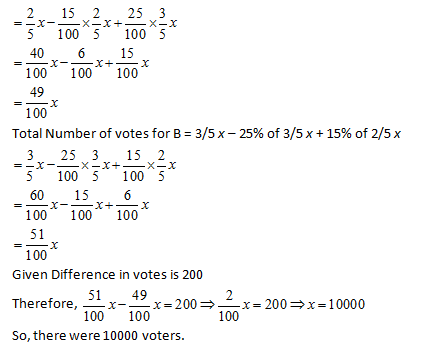 The person can buy 50 oranges or 40 mangoes.

Let the price of one orange be Rs. x

Let the total number of employees in the company be x

Then the number of men and women be 0.4x and 0.6x respectively.

Fraction of the women employed by the company who earn Rs. 25000 or less

Extra tips for CAT Percentage Questions
• The above questions illustrate the kind of problems that appear in MBA entrance exams. You can see from the problems above these questions are not purely based on the concept of percentages and require you to use some logic to identify the key considerations in the questions.
• Most of the CAT percentage questions will combine more than one topic in the problems and will require you to use some degree of logic to make equations in the problems.
• As with all CAT Arithmetic topics, the basic concepts (and when we say basic, we mean the absolute basic) can be found in school books.
• For bulk practicing problems for this topic, you can refer to RS Agarwal. Another good resource to practice problems and learn basic concepts for this topic is the Quantitative Aptitude book by Abhijit Guha.

Join Our Newsletter
Get the latest updates from our side, including offers and free live updates, on email.