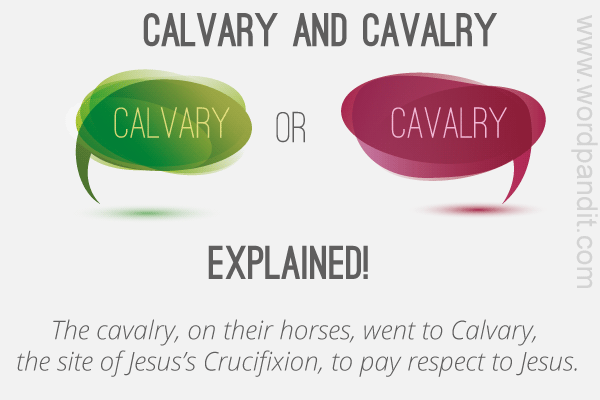 These are two words that are actually anagrams; anagrams are words or phrases spelled by rearranging the letters of another word or phrase.
Calvary is actually a biblical term and a quick search on Wikipedia returns this as the result: Calvary or Golgotha, was according to the Gospels, a site immediately outside Jerusalem’s walls where Jesus was crucified.

As a word in the language, Calvary is used to represent an open-air representation of the Crucifixion of Christ. As a noun, the word calvary is used to represent a great mental ordeal. Look carefully: calvary, the noun referring to mental suffering, will be spelled with a lowercase c. Calvary, the place where Jesus was crucified, will be spelled with a capital C.

Now that does the job for calvary, but what does cavalry mean? Cavalry is a word used for troops who are trained to fight on horseback.

Just Remember: The cavalry, on their horses, went to Calvary, the site of Jesus’s Crucifixion, to pay respect to Jesus.

Examples of incorrect uses of Calvary and Cavalry:

1. Major Tom wants the fire department’s “calvary” to respond to life-threatening emergencies.
2. There was zero coverage all over the field and send the calvary on blitzes.

Examples of correct uses of Calvary and Cavalry :

1. The priest and the lad reached Calvary early morning.
2. The place was occupied by both cavalry and infantry, waiting for the orders of the senior command about when to press forward.

‘Calvary’, always capitalized, is the hill on which Jesus was crucified. It means ‘hill of skulls’.