Affect and effect are two words, which can be confusing if you were to find out how to and when to use them.  The fact that a simple the usage of an a and an e can create such a fuss says something about the language we are dealing with.

In simple grammatical terms, ‘affect’ is a verb and ‘effect’ a noun. Being two different parts of speech, effect and affect also have different meanings.

Affect means to change someone’s feelings or state of mind, meaning affecting someone in some way.
Effect is mainly a result of something on another person or a thing.

To clear the confusion, you need to know the theoretical difference between Noun and Verb.
Noun: It is that part of speech, which refers to person, place, and thing and in this case an effect, i.e. the result of something on the other person.
Verb: it is that part of speech, which indicates action. So, going by the definition, something has affected someone’s peace of mind.

Have a look at the following sentences:

1) Does plastic effect the soil?
2) What is the affect of a slap on another person? 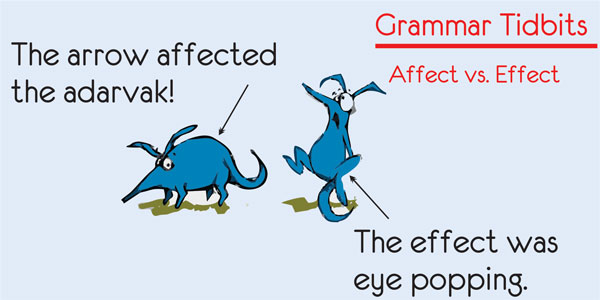 Affect with an a means “to influence,” as in, “The constant bards affected Tom Cruise’s health.” Affect also means, “to act in a way that you don’t feel,” as in, “She affected an air of superiority.”

Effect with an e means “a result”. For example, you can say, “The effect of the defeat was crushing”.

But wait a second, are there any exceptions to the above rule?

Well, (just to be on the safe side), you should know that affect can be used as a noun but its use is almost entirely reserved for psychological jargon For example, “She displayed a happy affect.”

And, effect can be used as a verb that essentially means “to bring about,” or “to accomplish.” For example, you could say, “Sam hoped to effect change within the immigrant community.”